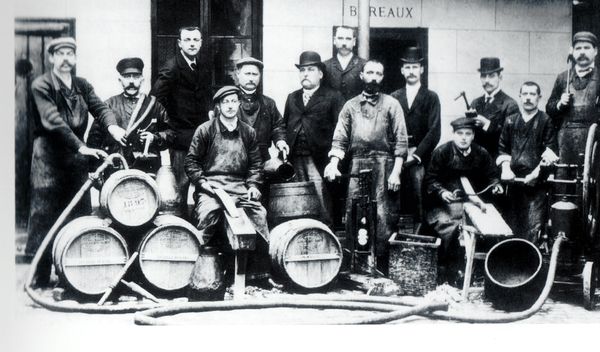 French vinegar is good, but can it stand out?

If there would be a country responsible for the development and refinement of vinegar in modern Europe, it would be France. Through the pre-Revolution corporations in many cities, especially the vinegar “capital” of Orléans, the Western traditional method of vinegar making matured from the 14th to 18th centuries. Though France was caught flatfooted at first by industrialization pioneered by the German states (the Kingdom of Baden is where the first “quick” process by Schüzenbach was developed), its reputation and quality was still unparalleled. Many countries in Europe such as Ireland and most of North Africa supplied the bulk of their domestic demand for vinegar from French vinegar. Even those that did not, French vinegars such as Dessaux Fils had a reputation globally amongst foodies and the elites second to none.

This elite status continued until almost the late 20th century. The French may not have been the biggest producers of cheaper alcohol (distilled) vinegar but they were the producers of choice for discerning importers. While French vinegar still has some cachet, it has been progressively crowded out and lost distinction against newcomers, not unlike how New World wines are grabbing market share globally.

I am not implying here that French vinegars have gone down in quality or taste mediocre. I am not trying to hit at competitors of fruit or wine vinegars. There are many great French brands, some of which chefs swear by such as Martin Pouret, the last standing producer of Orléans who recently opened his own boutique, Huilerie Beaujolaise by Jean Marc Montegottero, Melfor, the honey and herb vinegar of the Higy family of Alsace, and L’Olivier that sells blended vinegars. Even the “typical” wine vinegars from companies like Maille (owned by Unilever) and Charbonneaux Brabant are great for mass market wine vinegars. However, France has lost what many of its competitor countries have, a world renowned vinegar type that is sought for by name alone.

Why this conclusion? Several trends converged on French vinegar at once. First, the most renowned name in French vinegar, Dessaux Fils, had its vinegar factory in Orléans shuttered in the 1980s after being bought by Danone. The old building is now an art gallery and community center. This story is consistent with the large concentration of the French vinegar industry. That closure effectively ended what could have developed Orléans vinegar with modern marketing to compete with newcomers like balsamic and sherry vinegar.

Second, were balsamic and sherry vinegars from Italy and Spain respectively. Though not new and have been made for centuries, the global economy and globalized food tastes helped them become big exports and sought out by name. In addition, the European Union programs for protected denomination of origin (known as DOP or IGP depending on the level of authenticity) created protected markets for certain vinegars. Balsamic vinegar of Modena IGP must have a step of vinegar making done in Modena. Traditional balsamic vinegar of Modena or Reggio Emilia DOP as well as Sherry (Vinagre de Jerez) Vinegar DOP have to be made completely in the regions they are named for being Modena, Reggio Emilia, or Jerez de la Frontera. This helped protect tightly knit local industries and build a discerning quality and name for these vinegars. There are two other minor DOP Spanish vinegars (Condado de Huelva and Montilla-Moriles) but there are no French DOP vinegars and given the concentration of French vinegar producers, it is hard to see if there ever will be one though the cities of Orléans and Dijon would be prime candidates.

DOP vinegars are world renowned and help generate sales and interest. People buy balsamic or sherry vinegar on the name alone. France has nothing particular besides wine vinegars. Maybe Banyuls vinegar but that is not well known. This puts many French vinegar makers at a competitive disadvantage.

Third, the artisinal French vinegar makers are relatively smaller in number. There are dozens of bodegas in Jerez de la Frontera, dozens of acetaia in Modena and Reggio Emilia. There are  increasingly more traditional French vinegar makers, but hardcore artisinal outfits like Martin Pouret are far from common and are not concentrated in any given region.

The status of French vinegar is reflected in global export numbers where France ($30M) trails both Italy ($281M) and Spain ($35M) and even Germany ($36M). French vinegar isn’t going anywhere. I love many of its varieties and if you haven’t had a Martin Pouret wine vinegar, you haven’t had wine vinegar. However, besides the “French” cachet its producers are finding it harder to get a profitable niche like balsamic or sherry and continue to concentrate on private label or the few producers that make niche fruit and wine vinegars.

One Comment on “The ambivalent status of French Vinegar”