Vinegar making is many things: fun, educational, delicious, healthy, and an ancient tradition. I have made many posts about making vinegar at home and the traditional process, often called the “slow process” makes the most flavorful and well-rounded vinegar. The downside is the time: minimum is usually three months starting from a minimal mother and starter. Six months total for complete conversion is not uncommon.

As I have discussed previously there are things that can be done to speed up fermentation: increase the surface area of your mash to air so you get a bigger mother and faster fermentation or increase the temperature to the sweet spot of 75 – 85 F. Even taking these steps though, you are typically still looking at 3 months minimum for full fermentation.

Quicker methods of vinegar production typically require equipment such as pumps and sparges which are at least a few hundred dollars of investment. So what else can one do?

It turns out there is a way that can cut your vinegar fermentation down to as short as a month, or in some cases even quicker (note: some readers have notified me theirs is done in as soon as 10-14 days). This is accomplished by the adoption of an old process that has not been in use since the late 1700s/early 1800s. We can call it the “semi-quick process” to distinguish it from the industrialized quick process but it is historically known as the Boerhaave Process.

While the process is eponymous with Herman Boerhaave, the Dutch physician and scientist that lived in the late 17th and early 18th centuries, he was only describing a process that had been long practiced in France and described in an earlier article in the Philosophical Transactions of the Royal Society in 1670. He did not invent the process himself.

The process is relatively simple but ingenious. Two casks are built, both with false bottoms (see pic below). Both casks were filled above the false bottoms with rape, or the twigs from vineyards after the grapes had been harvested for winemaking. Next one cask was filled completely with wine while the other was only filled with wine to the level of the false bottom (1/3 to 1/2 full). 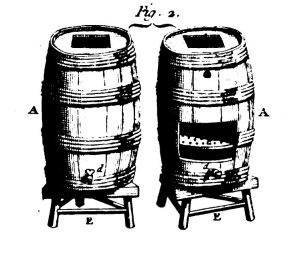 Cask setup as used in the Boerhaave process.

The workers would then, once or twice per day, draw the wine out of the full cask (to the level of the false bottom) and transfer it to the previously mostly empty cask. After about a week or two the casks would begin to heat up and a clear vinegar smell would emerge. There would not be a mother of vinegar accompanying this transformation, at least not as first. After 3-4 weeks you could have complete conversion to vinegar.

How does this work and why is it so fast? Remember our comments earlier on how the way to speed up traditional vinegar fermentation is to increase the surface area of contact with air. The rape in the casks provides a huge surface area, many times greater than just a surface of a liquid, and this massive surface area gives a lot of contract with air for the alcohol to ferment into vinegar. This surface area using twigs or wood curls was what later powered the first industrial process for vinegar manufacturing, the Schüzenbach Process using packed generators (known as the quick process).

So how can you do this at home? The good news is that it can be done cheaply and easily to speed your vinegar fermentation in the home or restaurant. I will guide you through the process of setting this up on your own.

Of course you don’t need casks, glass jars or food grade HDPE plastic buckets will work fine. You also don’t need to worry about a false bottom in my experience.

The first setup below shows me making wheat beer vinegar for myself using two 1 quart glass jars and grape stems from grapes we bought for eating at home. Instead of throwing out or composting the stems, you can stuff them into jars to help you make vinegar. 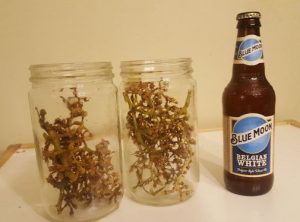 Alternately you can use oak spirals, easily obtainable on Amazon or through a local home brew store, to both act as the fermentation surface and provide wonderful oak aging and taste to your vinegar. 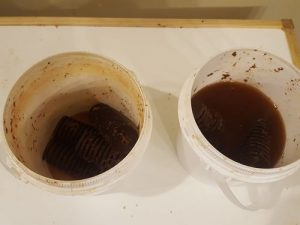 In both methods you have the following steps:

1. It is best to sterilize either the stems or oak spirals before use. Steeping them in boiling water for 2 minutes does the trick and gets the bitter tannins out of the oak spirals.

2. Fill both vessels with grape stems or oak spirals. Fill one jar with raw vinegar with mother. One of ours or another brand both suffice. Let the stems/oak soak in the raw vinegar for an hour and then transfer the raw vinegar to the second jar or bucket to allow those stems/spirals to soak. This step infuses your packing with vinegar bacteria that will be the workhorses of your fermentation. 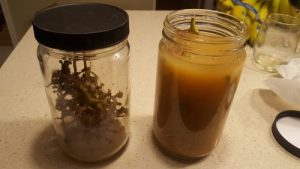 3. Now you are ready to start. First, figure out what to do with the raw vinegar. If you want to combine it with your alcohol keep about half a jar worth and store the rest. If you want to start from scratch, pour out all the raw vinegar and store it for later. You can re-use it. Next get your alcohol you want to convert be it hard apple cider (alcoholic, not regular cider), leftover wine (remove sulfites with ½ tsp of hydrogen peroxide per 750 mL of wine—do this in the bottle before combining with the mother), beer, or even mead.

Make sure your alcohol strength does not exceed 10% ABV so for most wine you probably want to cut it in half with water to lower the alcohol. Fill one of the jars or pails completely with the alcohol. For the other, fill it about ¼ full.

4. Now comes the diligent part. This method is quicker but it is not as hands off as the slow process. Every day—at least once per day—transfer the liquid from the full jar to the empty one as you just did above. That’s all you have to do, transfer it. This allows the packing in each jar to successively have time to breathe and use oxygen to convert alcohol to acetic acid. You can actually speed this up by doing it twice per day—preferably once in the morning and once in the evening. This gives each jar’s packing a 12 hour cycle. Up to four times per day will make the process proceed even faster.

The method in process (paper towel just shown as example; use something sturdier)

5. For the first 1-2 weeks, it will look like you are wasting time and nothing is happening. Typically around week 3 you start to get a vinegar smell and from then it proceeds faster until you should have conversion in about 4-5 weeks on the first run. Successive runs should be about a week faster since your packing is now full of vinegar fermenting bacteria.

6. After a while, you may get mother growing on the packing. This is no big deal but for this process, the mother is a hindrance, not help. Just remove it by hand or wash the packing in water and get it going again.

7. Once your vinegar is done, of course you can use it immediately but for a smoother and richer flavor, it is best to age it. Age it in a sealed barrel or jar that does not allow oxygen in. 30-60 days can be sufficient or even a year depending on how gourmet you want to be. If you like how it tastes from the get go, you can start using it and it will age as it sits in your pantry.

Now for packing you can use anything that won’t hurt you and won’t give an unpleasant taste. You can probably use wood chips for smoking though I haven’t tried this and cannot recommend it one way or another. You can even use sticks from outside. Just make sure to sterilize everything in boiling water before the first go. After that, the vinegar keeps it safe from harmful bacteria.

This method can be scaled up. For example. If you want to make 5 gallons of apple cider vinegar using two pails, you can do that. You just need more packing. You also need to find out how to transfer the cider between pails if you don’t like lifting 40 lbs repeatedly. Siphoning should work fine in this situation.

Vinegar is a complex yet rewarding process. Hopefully this helps those who have had trouble with the slow process or just want to speed up their production of vinegar for personal or culinary use.