I have a feeling every oenophile that clicks on this post is probably laughing hysterically at the headline. For decades, fine wine has been bought and sold by not just individuals but also auctioned in high end auction houses such as Southeby’s and Christie’s for ungodly sums due to fine wine’s ability to both retain its value and grow in value over time. It even has its own exchange and index, the Liv-Ex, which tracks the pricing of the top fine wines in the world.

Vinegar, on the other hand, is wine gone “bad”. A fine wine gone to vinegar is an investment ruined. So why should vinegar even propose to reach the sublime heights of international recognition and long-term appreciation?

As a vinegar lover and businessperson I have wondered if any vinegar would ever be bought and traded as a valuable commodity. If any vinegar can do it, it would have to be balsamic vinegar. Traditional balsamic vinegar of Modena or Reggio-Emilia to be exact. To review (and these posts on balsamic’s history, manufacturing process, and types are essential) traditional (tradizionale) balsamic vinegar has special regulations due to its designation as an EU certified designated origin (DOP) product. In short, there are only two balsamic vinegars that have DOP status for the traditional style: those of Modena and those of Reggio Emilia. The “Balsamic Vinegar of Modena” in your grocery store for $5.99 is not the traditional style: it is the IGP EU certified version. 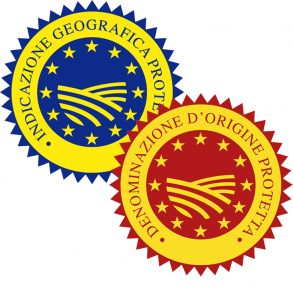 The DOP certification requires that all steps of production have to occur either completely in  Modena or completely in Reggio Emilia and that only grape must (mosto cotto) can be used to make the vinegar. The grape must, usually from Trebbiano and Lambrusco grapes, is concentrated grape juice fermented to vinegar and aged for a minimum period of twelve years. Extra aged (extravecchio) traditional balsamic has to be aged for at least twenty-five years. The aging takes place in stages of barrels that are increasingly smaller and made of different woods (oak, cherry, etc.) called the batteria. For traditional balsamic to be finally approved, it is judged by a group of judges from the local traditional balsamic association in Modena or Reggio Emilia.

In contrast, the cheap IGP certified Balsamic of Modena only has to have one step (like aging) in Modena while the rest of the process can happen elsewhere. In addition other ingredients such as caramel for color and taste are allowed and aging only has to be 60 days minimum.

Traditional balsamic is the valuable stuff you pay $100+ for a 250mL or smaller bottle. So it has some claim to value. But could it really cut it as an internationally traded and recognized asset? Who knows? Below are a list of Pros and Cons that weigh on its possibilities. Starting with the Cons.

Limited history or awareness globally as a commodity 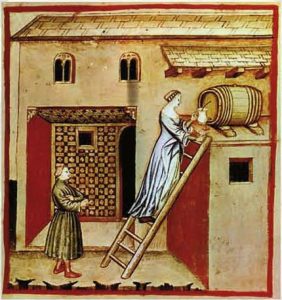 Balsamic vinegar in the Middle Ages

Balsamic vinegar’s roots stretch back to the Middle Ages but as the history article linked above states, it was a closely guarded local secret in the Duchy of Modena up until the invasion of Napoleon’s troops. They respectfully stripped the estate of the Duke of Modena and sold everything, including the vinegar in the Duke’s private acetaia, or vinegar cellar. This is how balsamic made its debut to the wider world. Its fame grew in the 19th and 20th centuries but true global recognition and wealth only came as late as the 1970s and 1980s. Balsamic as a whole is thus much newer on the scene than many fine wines and has so many (low quality) varieties abounding that many people don’t know how valuable some of its varieties are. Markets need awareness at a minimum since any prospective buyer needs not only a seller but an expectation that he/she can become a seller down the road.

Professional Critics and Valuations are Rare

Professional grading? Who needs it! Well, if you want a market where certain vinegars are regarded as more valuable than others, it certainly helps. Don’t get me wrong, balsamic vinegar critics do exist. There are the judges in the balsamic associations which judge the vinegar by the acetaia to see if it is fit to have the “traditional” designation. There is also La Confraternita dell’Aceto Balsamico Tradizionale (The Brotherhood of Traditional Balsamic Vinegar) which is an organization of balsamic vinegar lovers in Italy that annually holds a judged competition for the best balsamic vinegars. The latter is a good and dedicated group. However, internationally known and recognized critics and graders aren’t really a thing in vinegar. It’s a condiment after all so people buy what they like.

Public auctions are rare and its not a very liquid asset

Southeby’s and Christie’s have never auctioned vinegar (I checked). They have auctioned hordes of fine wine. Again, a viable asset class needs some kind of market where it can be easily bought and sold at various prices. Sometimes there will even be market makers. Balsamic vinegar has had auctions and they have been very expensive, but these occasional events don’t guarantee a continuous and liquid market. Buyers and sellers could trade over the counter but there is not much evidence this occurs with regularity. As will be shown in the Pro reasons though, when there is an auction, balsamic vinegar can show it has high value.

Balsamic vinegars (and sherry and other vinegars) are largely known and valued by their aging period. As vinegar ages, its flavors mature, become more exquisite, and the vinegar becomes more valuable. There is, however, no correspondence to the vintage year to separate different batches of balsamic. Given the batteria can contain vinegar aging from various periods mixed together, it is questionable how useful a vintage year really could be. It could be directional, especially if the grapes or weather gave the vinegar a special characteristic, but currently few people who make and love vinegar care about the year it came from, only its aging period. This would make it hard for an asset market. How to price a 25 year aged vinegar made in 2008 vs. 2017 from the same acetaia? We have no real guide or idea. Though there are lot numbers, these are for record keeping and traceability and have no effect on the price.

Acetaia are not well known

This is a pretty weak reason. Though acetaia may not currently have a widespread international recognition, this could change. I don’t know which one would be considered “Rothschild” grade or what not but this is something that could evolve over time.

Despite the strong negative reasons listed before, there are some signs of hope.

High prices have been paid in balsamic vinegar auctions

In 2007, at the first International Auction of Balsamic Vinegar in Modena, a 100mL bottle (Traditional Balsamic Vinegar of Modena) was sold for 1,800 Euros (about $2,500 at the exchange rate then). This would make this vinegar cost about $25,000 per liter or almost $95,000 per gallon! At the same auction, a nine barrel batteria of aged balsamic vinegar sold for 31,000 Euros (about $43,000). These numbers would definitely indicate balsamic vinegar has buyers that are willing to pay large sums for its most premium offerings. Granted, this was before the financial crisis, however, fine wine has performed well since then. Without many widely known subsequent auctions it is difficult to know what prices would be now.

Vinegar production that uses grape must is indirectly dependent on the growth season but the requirements for aging and judging of traditional balsamic vinegar means that its supply is well controlled and very inelastic for years due to the aging requirements. In fact, the aging requirements make its supply likely more inelastic than many fine wines. Therefore a situation where bids outnumber offers could quickly develop and maintain itself, driving up prices for a sustained period.

Technical authenticity can be established

While the balsamic vinegar market is unfortunately rife with frauds, misbranding, and misleading labels, there are routes to confirm authenticity. Similar to wine, companies like Eurofins have developed techniques to fingerprint balsamic vinegars from specific regions, batches, and possibly even cellars. As long as a genuine reference sample exists or a database entry is available for verification, the authenticity of rare or high prized balsamics can be ascertained.

Chinese buyers will show up

I only mean this half jokingly. Fine wine’s rise as an asset in the last 10 years has been inextricably linked to interest from East Asia and auctions in Hong Kong commonly sell high priced vintages. In the 2007 auction mentioned above, two Chinese buyers, chefs from Shanghai, did bid on and buy some lots of balsamic. This is objectively good news showing the value of balsamic has an international reach at its highest end. A more optimistic situation than if a just group of Italians or even Europeans were the only bidders.

So could balsamic vinegar ever become not just a condiment but a traded asset? While it is clear that bottles of prized vinegar or barrels from a batteria can command huge prices it seems to be primarily a market for collectors, celebrity chefs, and ultra-premium foodies for now. Crucially, the big sales are from acetaia to buyers—no secondary market or active market of buyers and sellers remote from the source seems to exist. Professional valuations, while nowhere as important as market price signals, are also lacking. Finally some standard, if not a vintage, would need to be established to distinguish lots. While lot numbers exist, they are not necessarily common or signify any additional value. No one tracks how good vinegar was one year to the next.

If these problems were to change though, balsamic vinegars, and remotely sherry vinegars or long-aged Chinese vinegars like Zhenjiang or Shanxi style vinegars, have good inherent tributes of an asset. Their quality and values increase over time and do not degrade which allows the type of stable and improving quality an appreciating asset requires. They are also not any more difficult to understand than wine, and perhaps are easier to understand. Given the money sloshing around in interesting investments from fine wine to modern art, who knows what the future could hold.