Much of the food we love to ferment is fermented by bacteria. Obviously vinegar, which my company is dedicated to, is a prime example with several families of acetic acid bacteria contributing depending on the method of vinegar fermentation, acidity, and starter alcohol. For a variety of fermented foods, however, lactic acid fermentation by various lactic acid bacteria is primary. From yogurt to sourdough bread to kimchi, they are definitely one of the world’s favorite fermentation organisms.

But why does temperature have the crucial role it does? Temperature can play a variety of roles in chemical kinetics, the study of the speed of chemical reactions. Usually a certain minimum temperature is needed to give molecules the “activation energy” they need to carry out a reaction. Beyond that, temperature usually speeds up the reaction the higher it gets, but there are always limits. The limits are most important in biochemical reactions which are often catalyzed by enzymes—proteins made from the DNA of the organisms that use them. At too high a temperature the reaction slows and eventually the enzyme itself becomes inactive in a process called denaturing.

When many types of yogurt are fermented, you start heating the milk to 180 F or so. This is primarily to denature certain proteins to allow them to form looser structures and assimilate well into creamy yogurt. So super high temperatures are bad for biochemical reactions. But fermentation is more than just a biochemical reaction. It is carried out by microorganisms and these organisms have their own temperature requirements. Usually their range of growth and fermentation efficiency is much narrower, and lower, than the limits of the proteins they use. The range for vinegar bacteria is best between 75 – 85 F (or 25 – 30 C). For lactic acid bacteria, it depends on the type of bacteria and fermentation. Thermophilic lactic acid bacteria for yogurt work best between 110 to 115 F. Sourdough bread lactic acid bacteria prefer the low 90s F. In almost all cases, the fermentation productivity slowly ramps up from a minimum to get to the best temperature. It then subsequently falls off a cliff if you proceed much higher than the optimum.

Fermentation productivity is related to the metabolism of the bacteria, but most importantly it is related to their reproduction rate. All things equal, faster exponential growth by cell multiplication is a bigger driver than streamlining their internal chemistry.

A typical growth curve vs. temperature, one for a common acetic acid bacteria, Acetobacter Aceti, is shown below [1]. 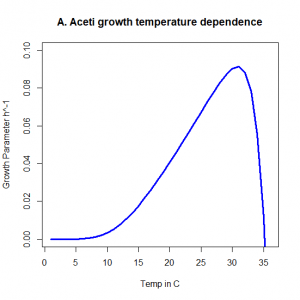 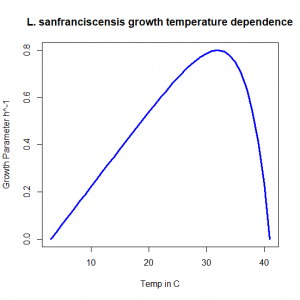 The growth rate on the y-axis is the growth parameter, the kind you would see in an equation for exponential growth like:

is the bacteria population,

is the starting population,

Yes, these are the Arrhenius equation for each part.

I won’t get too complicated right now but

are constants determined by the microorganism,

are kinetic parameters dependent on temperature for growth and death respectively.

is the gas constant, well known to those who have studied chemistry. All these have to be solved experimentally. Based on Acetobacter Aceti, the values are (from [1]) –

. Note, there seems to be a mistake in [1] such that the figure is replicated only if the temperature inserted is Celsius, not Kelvin so for the values above use Celsius for T or for Kelvin use

The second method from [3] was first deduced via nonlinear regression. It is:

are the minimum and maximum viable growth temperatures. This equation was used in [2] with values of

and minimum and maximum temperatures of 3 and 41 degrees C.

Temperature is very important to maintain, especially if you are trying to optimize production. Be nice to your bugs and they will be nice to you!

One Comment on “Temperature and Speed for Bacterial Fermentation”