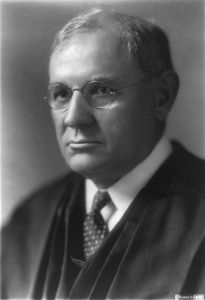 With the Supreme Court in the news, it may be a good moment to go back in time to a landmark Supreme Court case focusing on none other than vinegar! In the early 20th century during the Progressive Era, many landmark reforms for food and drug quality were passed. Vinegar became drawn up in many of the reforms of the time such as the Pure Food and Drug Act of 1906. Spurred on by rife food and drug adulteration as well as popularizations of poor food processing conditions such as The Jungle by Upton Sinclair, Teddy Roosevelt’s signing of this Act ushered in a new era of government regulation of food quality.

Chief amongst the quality monitored was the claims made on the labels versus the actual foods. In vinegar’s case, this would become a contentious issue since many vinegars existed based on juices, flavored vinegar, vinegar made from waste products, and other variations. Soon after the passage of this and other laws, the food industry started the journal Pure Products which was an industry publication reporting on the best practices according to scientists and industry experts so companies could keep abreast of the new laws and improve their processes. Vinegar was often a prominent discussion in this journal for both quality and legal implications. While these issues may seem trivial, it eventually took the fate of American vinegar to the US Supreme Court. A minor production decision by the Douglas Packing Company would influence the fate of vinegar labeling in the United States until this day.

Douglas Packing Company was founded in 1911 by brothers Robert and Charles Douglas along with partners Earle Neville and John Clingen. It was located in the picturesque town of Fairport, New York, a suburb of Rochester, located along the Erie Canal. Three of the partners, excluding Charles, had worked for the American Fruit Products Company and left when they saw a great new opportunity—apple pectin.

Pectin is a carbohydrate that is found in apples and that finds a use in the making of jams or jellies. Typically in making jam, one needs to boil the fruit mash for a couple of hours to break down the pectin in the fruit and allow the mash to gel. This is time consuming and can burn off flavor. By adding pectin, the jelly or jam congeals much more quickly and retains its flavor.

Pectin is found in the cores of apples, even those waste apples which were frequently disposed of. Douglas Packing Company was originally founded to mass produce pectin for the jam and jelly makers across the country. Douglas Packing Company picked an ideal location. New York, along with Massachusetts and the Shenandoah Valley in Virginia, was one of the apple orchard capitals of America. The apples, and especially their cores, would not be in short supply. 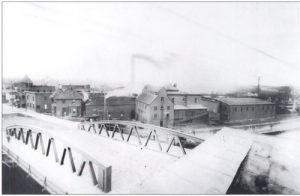 The Douglas Packing Company in Fairport, NY. Picture from Perinton, Fairport, and the Erie Canal, p. 79

Business went well and having a full time chemist, William Bender, helped make the process scientific and efficient. Douglas Packing soon spread into other apple processing businesses such as cider and apple cider vinegar. It became one of the largest vinegar manufacturers in New York State which was quite a feat in the state that the US Business Censuses of this time indicated had the largest number of vinegar factories of any state.

At some point before 1921, the company made a fateful choice. Apple harvesting only occurred during three months of the year and after the apples were harvested, processed, and made into vinegar, little additional production was possible until the next season. Usually cider vinegar makers would produce and store huge amounts in vats. This was both expensive and risky since one could have excess inventory or a stockout with little recourse.

Possibly in an attempt to balance production load year round, Douglas Packing Company began dehydrating apples, removing about 80% of their water content, and storing them. When they were ready to make cider vinegar, they would re-hydrate the apples and use the pressed juice to make its Excelsior brand “Pure Apple Cider Vinegar”.

It is unknown whether they believed this did not violate the Pure Food & Drug Act clauses on “misbranding” or thought it would be unnoticed. In addition, they used sulfur fumes as a preservative for the dehydrated apples which they later tried to remove by adding barium carbonate. While not harmful, it would later be used by the government to contest the claim of “Pure” for the apple cider vinegar.

In 1921, one of the purchaser’s of Douglas’ apple cider vinegar in Milwaukee became suspicious of its content and relayed their concerns to both the industry association, the American Cider and Vinegar Manufacturer’s Association, and Federal authorities. The sixty-five barrels of apple cider vinegar were seized by the government and tested by government chemists to determine adulterations, if any. Douglas Packing had come under pressure from New York legislation as well that banned vinegar made from apple cores or skins from being called apple cider vinegar.

The case began in federal court in Milwaukee in 1921 and lasted until the end of the year. It was witnessed by many of the large vinegar makers in the country as it was an important test case on the applications of the new food laws to vinegar. The industry publication, the American Vinegar Industry and Fruit Products Journal, carried details of the trial as well as a full page warning to any companies against using apple cores or skins to make vinegar, or dealing with any company that did the same.

At the heart of the government case was the charge of mislabeling—not danger to health or safety. There was a possible health issue in that government chemists from Washington D.C. had found traces of barium carbonate, used to remove the sulfur preservative, that is poisonous. They never testified, however, that barium carbonate was present in dangerous quantities.

What is surprising in some ways about the case is how swiftly and resolutely the vinegar industry as a whole turned against the Douglas Packing Company. The government was able to rely on multiple industry experts to testify on its behalf including the Heinz Company.

Even an appeal by Robert Douglas made in a letter to the Journal in November 1921 fell flat. His argument that the process was not significantly different and was economically necessary was met by a truculent rebuttal from W.W. Armstrong, the chief counsel to the American Cider and Vinegar Manufacturer’s Association who directly compared Douglas to “a deluded inmate at an asylum.” The company’s methods were seen as underhanded and the vinegar industry wanted to distance themselves as far as possible.

In the end, Douglas Packing lost the case, with the court finding misbranding, and its sixty-five barrels of vinegar were seized and destroyed. Luckily, it was not found guilty of adulteration. It lost another case later in 1922 based on a similar charge in Rochester, NY.

Though its reputation was extremely damaged in the eyes of the industry, Douglas Packing did appeal and the Circuit Court of Appeals reversed the original judgment in favor of the government. The government itself then appealed and the case appeared before the Supreme Court with a decision issued on June 2, 1924. The case was known as United States v. Ninety-Five Barrels Alleged Apple Cider Vinegar, 265 U.S. 438 (1924).

Justice Pierce Butler delivered the decision of the Court which reversed the Circuit Court of Appeals judgment and agreed with the original judgment on misbranding. In short:

This ruling came down in spite of the fact that the original district judge who tried the first case admitted he could detect little difference in taste between the Excelsior brand and other traditionally made apple cider vinegars. Also, the government’s case stated that there was no claim that Excelsior vinegar was inferior to traditional apple cider vinegar, just that is was misbranded as being identical. “This case was a landmark in enforcement of the Pure Food and Drug Act. Regarding vinegar, to this day “Apple Cider Vinegar” or any other fruit vinegar must be made directly from the fermented juice of the stated fruit and not from rehydrated fruits (though this does not apply to juice concentrates). If any artificial flavoring is added, it must be called “Apple Cider Flavored Vinegar”.

For more on the case, see these articles in Google Books from American Vinegar Industry and Fruit Products Journal

5 Comments on “The Supreme Court – and Apple Cider Vinegar!”