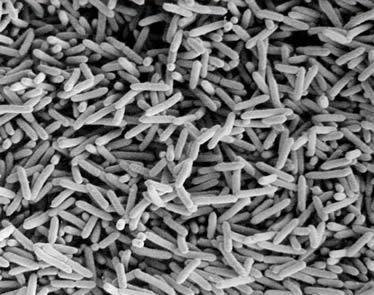 While some people know vinegar is a product of fermentation, even fewer know that bacteria, not yeast, is the essential agent. Acetic acid bacteria—the general term for vinegar fermenting bacteria—are present throughout our environment especially in fruits.

They long ago evolved to survive not only by metabolizing simple sugars (i.e. glucose) but the alcohol ethanol. Acetic acid is a waste byproduct of the metabolism of the ethanol. In addition, like many other bacteria, acetic bacteria can form a community inside of a biofilm made of cellulose. This is the origin of the famous “mother of vinegar”.

The first identification of acetic acid bacteria was made by Louis Pasteur. He correctly identified the microbial origin of vinegar fermentation. He was not the first to guess at a biological origin though. The German amateur scientist Friedrich Kützing correctly inferred in the early 19th century that the mother of vinegar was likely biological in origin. He called it the “vinegar plant” and believed it to be a sort of algae he called Ulvina aceti. Later, Dutch biologist Christian H. Persoon believed the mother of vinegar to be a fungus which he termed Mycoderma or ‘fungal skin’.

Louis Pasteur, through careful experimentation, correctly deduced its bacterial origin and understood that the bacteria were obligate aerobes (required oxygen) which they used to ferment ethanol to acetic acid. He named the bacteria Mycoderma aceti, in a nod to Persoon. He published his findings in 1864 and in November of 1867, the city leaders and vinegar makers of Orléans invited Pasteur to the city to speak to the vinaigriers about his discoveries and how to improve vinegar production.

As the 20th century went on and more research was done, more physiological differences as well as differences in the ability to metabolize certain salts or sugar alcohols led to a debate on changing the names for acetic acid bacteria. The legendary Toshinobu Asai, a Japanese researcher who focused on acetic acid bacteria, was one of the key enablers in this trend.

What does this all mean? First, there are many more species of acetic acid bacteria than brewing yeast. Second, because acetic acid bacteria are hard to cultivate and mass produce, vinegar makers do not use specific species or strains intentionally like wine or beer makers use specific yeast strains. It is too hard to obtain a pure bacterial culture and even harder to keep it pure in an industrial environment.

At Supreme Vinegar we sell mother of vinegar and though we have an idea of what they are (16s rRNA DNA sequencing is the default method to approximate what the bacteria are) many bacteria can be present in each culture. For now, understanding acetic acid bacteria is much more art than specifically picking out a brand of yeast.