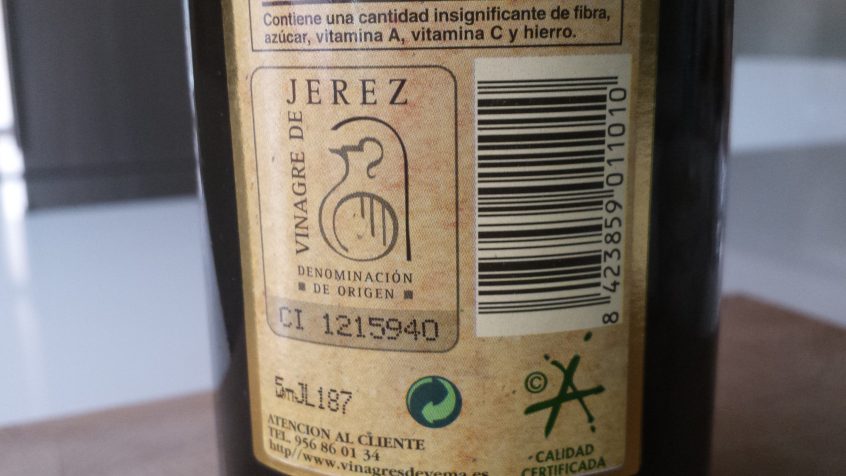 The vinagre de Jerez or sherry vinegar is a unique product of Jerez de la Frontera, a town in the Spanish province of Cádiz in the region of Andalusía. Like most of Europe, wine making in Spain extends back to Roman times, or perhaps even farther due to Phoenician, Greek, and Carthaginian colonies. This tradition survived even during the Moorish conquest of Spain from 711 onwards. Winemaking was allowed as long as the wine was for medicinal or tonic and not beverage purposes. The region was known as Ceret in Roman times and the town where a unique brand of wine was made was called al-Sharishi by the Moors. When it was reconquered by Fernando III of Castille, the Spanish called the town Xérés and later Jerez.

As one of the first nation states in Europe, Spain ended up exporting this wine widely, even before the end of the Middle Ages, where it found welcome markets in neighboring countries and England, where it became known as Sherry. The rapid commercialization of Sherry, however, did not seem to extend to its vinegar, at least in export markets.

Sherry wine’s market presence was increased when in the eighteenth century, visiting French merchants found a taste for it and began importing it in large volumes to France and from there to the rest of Europe. A large number of entrepreneurs from Spain and even some expats from Italy and England, helped grow the business into a large industry for Andalucía.

Sherry wine is primarily made of the two varieties of grapes Moscatel and Pedro Ximénez. For aging, sherry vinegar has two methods. The first is the standard aging, sitting in a wooden barrel, and is known as the añada process. The other method is a mutliple stage aging process similar to balsamic. There is some speculation that this aging inspired the rincalzo system for balsamic (or vice versa). For sherry vinegar the aging is done by a pyramid of barrels known as criaderas and soleras. 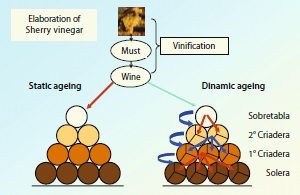 The top barrel is known as the sobretabla. Each successive row of barrels up to the second from the bottom is a criadera with ordinal numbering starting from the second to bottom row up. The bottom row is known as the solera. The sobretabla barrel holds the original wine and performs the first step of vinegar fermentation. Next, after a pre-determined time about 2/3 of the sobretabla is removed and placed with 1/3 volume each in the two barrels in the criadera below. Next after aging here, some vinegar is removed from these criadera to fill 1/3 of each of the barrels below and so on cascading down to the solera with the most aged vinegar.

This system helps homogenize the vinegar but also helps in aging as vinegar from multiple batches and ages is aged together in each criadera and the solera. It is a defining method of the sherry vinegar making process and gives sherry its distinguished flavor and quality. Like balsamic, sherry can be aged for many years.

Sherry vinegar thus has a production and aging process as complex as balsamic. Coming primarily from the city of Jerez de la Frontera, also like traditional balsamic it has DOP protected origin designation. A final similarity was the long resistance to mass commercialization by vinagreros or vinegar-makers in Spanish. Though sherry wine has been popular across Europe since the 18th century, and its vinegar is undoubtedly ancient, one of the first bodegas to aim at large scale production and commercialization was not established until 1910. The Bodega of Paez Morilla, originally started by Don Francisco Páez Sánchez and continued by his son Don Antonio Páez Lobato is well known and was one of the first to make sherry vinegar as a primary product for sale.

Today sherry vinegar has ballooned in importance and become a vital export, along with sherry wine, for the otherwise economically depressed region of Andalucía in southern Spain. In fact, since 2004 Spanish exports of vinegar have almost doubled from $18 million to $35 million in 2014. Spanish vinegar imports by the United States surpassed French imports for the number two spot by value in 2002. Its balanced taste between the sweetness of traditional balsamic vinegar and regular wine vinegar has made it a favorite of chefs worldwide.

2 Comments on “All about Sherry Vinegar (Vinagre de Jerez)”