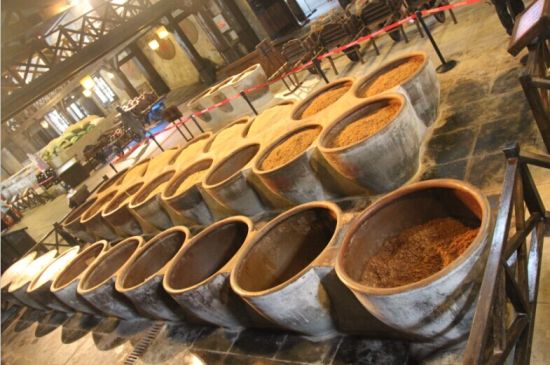 See part I on the history of Chinese vinegars here

Like all vinegars, the basic path to vinegar is the fermentation of an alcoholic substance by vinegar bacteria. However, instead of using waste wine or liquor, Chinese cereal vinegars start with starchy material, change the starch to glucose and other sugars through a process called sacchrification, ferment this sweetened mash to alcohol, and finally convert the alcohol to vinegar.

Sacchrification is again often accomplished with the help of a biological organism. In order to convert starch to sugar, the moistened starch must be exposed to a special kind of protein called an enzyme. Enzymes are amongst the most important of all biological compounds and are most of what an organism’s DNA is coded for. Their function is to act as catalysts in chemical reactions. In short, a catalyst is something that helps speed up a chemical reaction without being consumed itself in the reaction.

The enzymes for sacchrification are called amylases. Amylases are ubiquitous in nature and one specific amylase, alpha amylase, is a main component of your saliva. Amylases break the links in the long chains that make up starches to release sugars like glucose. This is why bread chewed in your mouth eventually gains a sweet taste. Your alpha amylase is converting the bread’s starch to sugar.

Amylases occur both naturally in some grains but can also be introduced by the use of helpful molds. Most of these molds belong to the genus Aspergillus and though they have cousins which cause the unhealthy black mold that can damage houses and contaminate vents, these molds are helpful in that they naturally produce amylases to break down the starch into sugar.

This process, however, is oversimplified in the previous description. Chinese vinegars are unique in that unlike traditional malt vinegars that start from a liquid wort, they rather start from a moist, but not liquid mash. This process is called solid state fermentation and is distinguished by the fact that the ingredients are not fully submerged in water for most of the fermentation cycle.

Starting with the starch ingredients, the ingredients are first mixed according to the, often proprietary, recipe. For example, the typical ingredients in the famous Shanxi Vinegar are sorghum, wheat bran, barley, and pea. They are then crushed to homogenize and ensure the husks release all the starch necessary. This mixture is then usually steamed. The heat of the steam helps activate and accelerate the sacchrification action of the amylases already present in the ingredients.

At this point, a special fermentation starter known as Qu (麹or 曲) (pronounced ‘choo’) is added to the mash. Qu is a large brick-like substance that contains a pre-mixed and prepared cocktail of helpful molds and yeast which will carry out the sacchrification and alcoholic fermentation. It is very similar to  Japanese Koji but it contains both molds and yeast rather than just mold as Koji does. 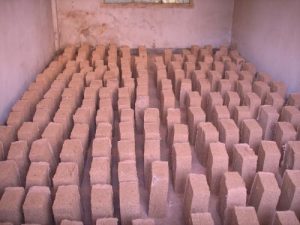 The Qu is added, mixed in well, and the mash is placed in an urn kept in a warm place to provide the optimal temperature for the microorganisms. The heated mash then performs simultaneous sacchrification and alcoholic fermentation. The mash is transferred between urns once a day to control the temperature due to the heat released by the fermentation reactions. After about 5 days, all starch has been converted to sugar and sugar to alcohol. It is ready to start acetic acid fermentation.

At this point, a vinegar starter called Pei (醅) (see header image) made of pellets from dehydrated raw vinegar and filled with Acetobacter is added to the alcoholic mash facilitating the conversion to vinegar. The Pei is circulated once a day as acetic acid fermentation progresses which is completed after about two weeks.

To finalize the vinegar, salt is added to halt any further fermentation and the mixture is let sit in the sun for several days. Finally, it is washed three times with water to ‘leach’ out the acetic acid and flavor chemicals giving the final vinegar. Each wash step yields a different level and quality of vinegar and the washes are used accordingly for vinegar or to make more Pei. Finally, the finished vinegar is placed into vats and aged for long periods which can range for 6 months to 6 years for most vinegars. 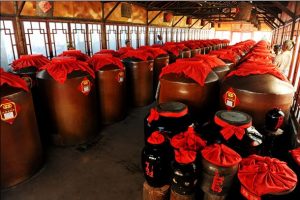 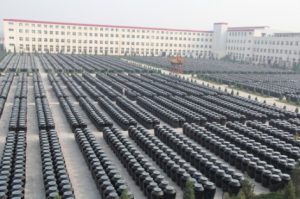 The finished vinegars are usually black in color and are then sold to consumers. Amongst its many vinegars, China has four famous vinegars which represent the main regional culinary traditions they have evolved from. They are Zhenjiang (or Chinkiang) Black Vinegar, Shanxi Mature Aged Vinegar, Sichuan Baoning Vinegar, and Fujian Longchun (Monascus) vinegar. These vinegars will be discussed in the final article of the series.