For those familiar with vinegar making, the oldest standard method of making vinegar is called the Orléans method or “slow process”. This is the romantic vision of vinegar making where wine or cider is poured into wooden barrels, mixed with mother of vinegar, and allowed to “breathe” through a cloth covered hole on the top. These were kept in warm rooms, sometimes with artificial heat (as with the stove in the header picture). This was the dominant mode of manufacturing vinegar in Europe until the middle 19th century and is still the preferred method of modern artisinal vinegar makers.

But why the “Orléans” method? Why not any other city since vinegar was made everywhere? Much of this has to do with the history of vinegar in France, which was the dominant producer for most of the late Middle Ages through the late 1800s.

The legendary French vinegar of the city of Orléans developed in parallel with the development of French wine. As the French aristocracy grew in wealth and power in the High Middle Ages, the demand for wine from the regions of France such as Loire, Rhône,  and Bordeaux to the south of Paris grew substantially. Most of this wine was barreled in the wine regions and then sent by carts to the Loire River and then on barges up the Loire River to Orléans. Orléans was the closest major city on the Loire to Paris and here the wine disembarked for warehousing and distribution.

Orléans had a large number of wine merchants and they would usually sample the wine before sending it to their valued clients in Paris. The good wine passed and traveled on while the “bad” wine was left—to turn into vinegar. The vinegar, incidental at first, later became an art in and of itself. The Orléans Process came to describe the first improvement of vinegar making in the West beyond letting wine sit and turn to vinegar.

On October 28, 1394, the vinaigriers (“vinegar makers”) were substantial enough to organize themselves into a corporation. This ‘corporation’ was more like a medieval guild though than a modern joint stock company. Through the corporation, vinegar would be made, prices would be set, and apprentices would be trained. All the while, the secret of the process would be kept.

In 1580, the corporation, numbering four vinaigriers, formally was given official corporation status by King Henry III whose proclamation gave the vinegar merchants a monopoly on making vinegar in Orléans. Perhaps not coincidentally, the tonneliers  (coopers or barrel makers) of  Orléans received their own corporation one year later in 1581. The vinaigriers were required to use the barrels of the coopers, starting a longstanding symbiotic relationship. 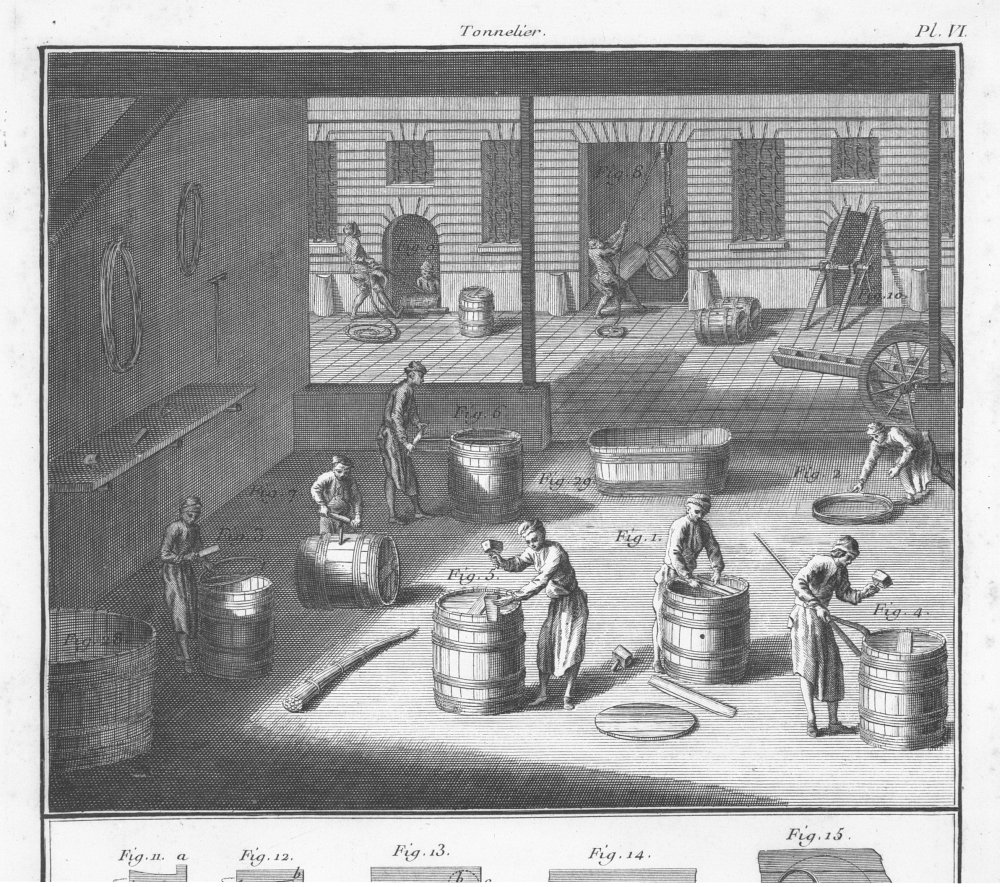 In 1594, when there were now thirty-three vinaigriers, the first known regulations for quality control of vinegar were established in Orléans  where eighteen articles regulating quality were enforced by four master jurors from the community. These jurors were empowered to inspect the vinaigrier’s products and force the payment of fines. A description of their tasks is discussed in Article 7 of these articles:

“If, in the house of a master vinaigrier are found barrels of vinegar which are slimy, rancid, or moldy they will be seized and broken and the offender will pay a fine of one écu (a French gold coin)”

This was no idle gesture. As the fame of the vinegar of Orléans grew and more vinaigreries (vinegar breweries) were established, so did the ranks of frauds, counterfeits, and unscrupulous businessmen. Frauds attempted to displace the famous white wine vinegars of the city with inferior imitations that even had the label of the city on the barrel. Enforcement could be difficult since vinegar was not sold by the bottle, but rather was sold wholesale to vinegar salesmen who wheeled barrels through the streets selling it to homes or people passing by who had their own vessels. 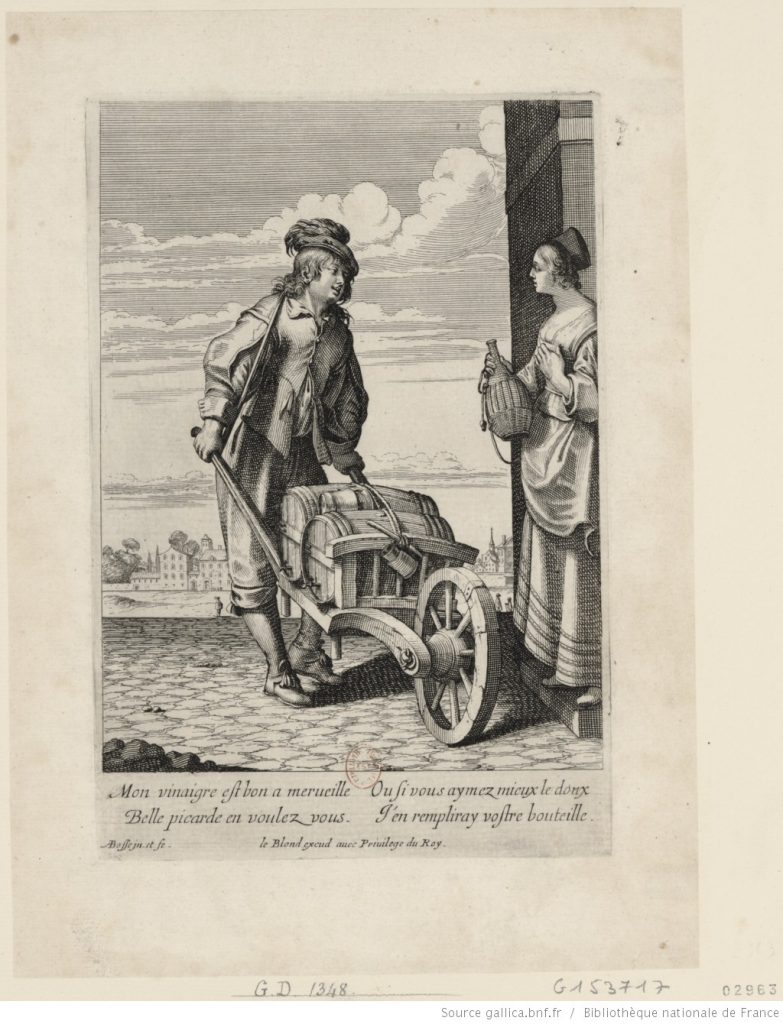 By the 1730s there were 200 vinaigriers in Orléans and at the height of their prosperity, the eve of the French Revolution, there were 300. The Revolution, and the changes just before it, would drastically change Orléans and its vinegar industry. The corporations were viewed by reformers under both Louis XVI and the later National Assembly as against the ideas of open competition and free markets espoused by the Enlightenment. The corporations were temporarily banned under Louis XVI but were brought back under pressure from the uproar. After the Revolution though, they were banned forever.

The times of the Revolution and the early 19th century were a hard time for the vinaigriers and their numbers dropped below 100. However, France was still the king of vinegar in the West and Orléans was its capital. Production was more concentrated but the remaining vinaigreries were helped by exports to Europe and the New World. The vinaigriers organized into a new industrial association and were even granted a coat of arms by the city. 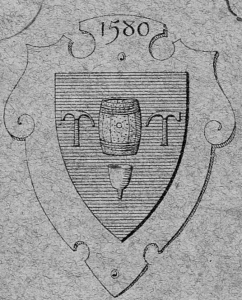 Coat of arms (uncolored) of the Vinaigriers of Orleans.

The ultimate end of the Orléans vinegar tradition was slow but relentless. The first blow was industrialization. A new quick process pioneered by Schutzenbach in the 1830s in the Kingdom of Baden made vinegar manufacturing large scale and less labor intensive. German states and later a united Germany produced huge volumes of cheap vinegar in competition.

Second, was the creation of spirit vinegar, known in the US as white distilled vinegar. An ultra-cheap substitute to the high quality wine vinegar of Orléans, it was made from cheap liquor and found a market with less discerning consumers and the new pickling industries. The price competition of wine vinegar was not helped by the Phylloxera insect that devastated French vineyards and drastically raised the price of wine and wine vinegar.

These forces combined to make the market consolidate until only 17 vinaigreries remained in 1914. One of these, Dessaux Fils, became the largest vinegar manufacturer in France for a time and while it abandoned the old methods for industrial processes, it helped keep Orléans a center of vinegar making and even established plants abroad in Egypt, Tunisia (where a descendant company exists today), Algeria, and Morocco. 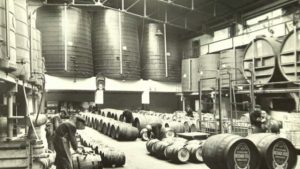 The vinaigrerie of Dessaux Fils in the early 20th century

A label for a bottle of Dessaux Fils wine vinegar

Even Dessaux Fils would have trouble competing though once another new process for making vinegar, the submerged process, was invented in Austria in the 1950s. Orléans no longer had a competitive advantage and the mature vinegar market’s margins were small. Dessaux Fils would endure a succession of acquisitions and have its Orléans plant finally closed in the 1980s.

As of this post, there is now only one vinaigrerie left in Orléans. The company Martin Pouret, around since the golden age of the industry in the late 18th century, still uses the old Orléans process and is one of the few left in France that do so. Riding the wave of new interest in vinegar by foodies, it hopefully has a bright future being the lonely standard bearer of a now almost disappeared ancient tradition.

3 Comments on “The History of Vinegar: Vinegar making in Orléans, France”