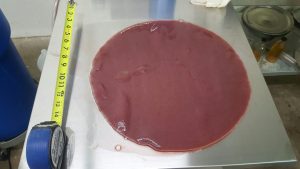 The mother of vinegar is probably the most emblematic and representative feature of traditionally made vinegar. Known for centuries as the precursor to wine, or another alcohol, changing to vinegar. It is mentioned in ancient texts both in the West and the East. However, what is the mother really? What does it mean and how does it promote the growth of vinegar? Is it healthy?

Acetobacter Aceti, one of the first known and main species of acetic acid bacteria

So we know bacteria make vinegar, but why do they need the mother? The mother is in short what is technically called a “biofilm”. A layer of material made by bacteria for the purposes of community organizing and ecology. The mother of vinegar is actually made of cellulose, the same material that comprises much plant matter such as grass or tree bark. However, it is organized differently as to not have such a rough texture. The mother of vinegar gives the bacteria a collective home and allows them to more efficiently all the exchange of oxygen from the air, which they need to survive and make vinegar, as well as engage in respiration, where water, a byproduct of the vinegar process, is exchanged into the air.

The mother is a clear sign of vinegar production and grows larger over time, sinking and not re-forming when the bacteria are done converting alcohol. Traditionally the mother is only used by vinegar makers and filtered out of the final product for consumers. This is both for aesthetic purposes and the fact that many consumers are unaware of how vinegar works and may think the mother’s appearance is a sign of spoilage.

Some mothers are different. For example, many of the raw, unfiltered vinegars sold on today’s market are made using an industrial process called submerged fermentation. In this process, the mother does not form on the surface of the vinegar like in the traditional “slow” process but is rather produced in the vinegar as small globules as a result of bacteria fermentation.

Can you eat the mother? Of course, it is harmless. Is it healthy? Well, that’s a more complicated question. Evaluating the health benefits of raw vinegar one needs to differentiate between the mother itself and the products in raw vinegar that are not filtered out or destroyed by pasteurization.

Vinegar has a variety of health benefits. This is not just folk wisdom but has been verified by a growing volume of professional, peer reviewed studies (which I will focus on in a future blog post). Beneficial effects for blood sugar and blood pressure have been reported. However, almost none of these studies bothers to differentiate raw or processed vinegar. In fact, most studies use retail vinegar and given the similar health benefits for the different vinegars used–from apple to persimmon to white distilled–a lot of vinegar’s benefits may be due to acetic acid and other common constituents and not completely dependent on the type of vinegar. However, it is likely additional health benefits can be based on proteins or polysaccharides specific to certain fruits and their vinegars (see the persimmon vinegar link).

Unfiltered or raw vinegar, though not yet extensively investigated, may have health benefits due to compounds that are not removed from the vinegar in processing. The fermentation of yeasts and acetic bacteria leave many chemical compounds that are not yet well understood and may be beneficial. While typically the filter pore size is not small enough to remove most molecules, the pasteurization heating process will likely destroy or inactivate many compounds, especially heat sensitive proteins.

The mother is a feature of raw vinegar as well and this is what is traditional removed by filtering. Research on the benefits of the mother typically does not follow oral intake, but rather its possible use as a wound dressing. The form of the cellulose and the antimicrobial properties of vinegar make it excellent for this use. One of the few papers discussing the ingestion of acetic acid bacteria for health benefits mentions special lipids they contain and shows some results on them assisting in muscle repair post exercise.

If there are special compounds in the mother, which is very possible, it is hard yet to say what they are and how they help. The raw cellulose itself is difficult for humans to ingest. Maybe it will help make you more regular in your bowels but it cannot be digested as a whole since we lack the specific enzymes.

My company sells mother of vinegar, primarily for home vinegar makers, and we may one days see all its health claims verified but for now they are pretty speculative.

8 Comments on “Mama Mia! What is mother of vinegar?”