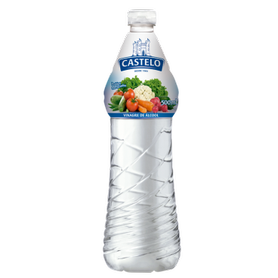 New Zealand’s DYC vinegar which is from ethanol–from milk whey!

First, a bit of history. White distilled vinegar, known outside the US and UK as “spirit vinegar” or “alcohol vinegar”, originated around the 1860s, most likely in Germany. With the advent of a new manufacturing process (the quick process) for vinegar that allowed it to be industrialized, options expanded beyond the traditional slow fermented vinegar from grape wine or hard cider. What was discovered was that distilled spirits, from the cheapest source possible, could make a relatively bland vinegar that could be used for basic uses, cleaning, sauces, and importantly, for the new industries of pickling and canning.

Spirit vinegar used basically whatever was cheaper in the country where it was made. The Germans used alcohol from fermented potatoes, aka watered down vodka. The French used sugar beets, the British used low quality malt vinegar, the Kiwis in New Zealand settled on milk whey, and in the USA, spirit vinegar was made from alcohol distilled from fermented molasses. That is why we Americans call White vinegar “distilled”. In short, these gave you nearly pure ethanol and this was made into cheap vinegar. In the process it destroyed much of the traditional vinegar makers, particularly in Europe where the city of Orléans went from about 200 traditional wine vinegar makers to 17 in a 100 year period up to World War I. Granted, other economic and political realities were at play here but spirit vinegar was the knockout punch.

As I stated before, the distillation of fermented molasses into a relatively clear alcohol called “low wine” is why Americans call spirit vinegar “distilled vinegar”. However, nowadays white distilled vinegar is not distilled in any part of its process. What happened in the post World War II period was the introduction of cheap ethanol made directly from ethylene that could be extracted from natural gas. This process, known as the Wacker Process, gave the vinegar industry ethanol cheaper than they could get from molasses and without the expensive distillation equipment that one would need. From this point on, white distilled vinegar, at least in the USA, would be made directly from ethanol.

US FDA regulations require any vinegar for human consumption has to be fermented naturally, by bacteria, so synthetic acetic acid was never used for white vinegar (legally). This is not the case in countries like Russia or India where industrially produced acetic acid using non-biological reactions can be sold as vinegar. However, the ethanol can come from any source as long as it is not tainted and is fermented naturally to white distilled vinegar. As manufacturers we also are not mandated to disclose the source of the ethanol.

Pure ethanol does not have enough nutrients for the bacteria to thrive so nutrients, such as phosphates or yeast extract, are added to get the fermentation going. As time went on, different sources of ethanol became available that allowed one to juggle your options to find the cheapest source to use. Ethylene was a favorite source but at times corn ethanol or sugar cane ethanol from Brazil have been cheaper options to use. In the current environment, many vinegar plants in the USA are using ethanol imported from France made from sugar beets.

To be honest–and I am not making a marketing pitch since Supreme Vinegar does not manufacture white distilled vinegar–there is not a huge known difference depending on the source. The ethanol that is purchased usually has the same specifications – 190 proof (95%) ethanol with the rest being mainly water and a small amount of ethyl acetate. Ethyl acetate is harmless and is a natural product of the vinegar fermentation process anyway. Now there can possibly be flavor chemicals in plant based ethanol (called esters) that may impart a bit of improved taste and aroma but there should not be any compounds that will cause health issues. If there are, there is a contamination issue that the refiner should not have if they meet spec. DYC Vinegars in New Zealand let’s you know their vinegar ultimately is from a milk product though I don’t know if those with allergies or lactose intolerance need to care. The yeast should have handled the lactose and the distillation of the ethanol should have removed the proteins.

That being said, there aren’t any studies really that analyze distilled white vinegar from different sources to determine the difference. Most studies are concerned with finding out if manufacturers surreptitiously sneak in industrially produced glacial (pure) acetic acid into food vinegar. There are various ways to detect this such as Carbon 14 ratios, etc. that I won’t go into detail on here. Also, realize that if you buy imported vinegar, particularly not from the US, Canada, or Western Europe, there is a risk that manufacturers use industrial acetic acid, regulations or not, to cut cost. This has been an issue in the past in places such as parts of Latin America, China, and Africa. You shouldn’t assume the vinegars are bad, it is just another heads up about food product safety.

Finally, depending on your use of white distilled vinegar, read the label carefully before purchasing. Standard vinegar strength, measured in acidity, is 5%. This is also the recommend minimum for canning. There are a lot of private label “budget” brands out there that look too good to be true until you read the label carefully and they are 4% acidity. The legal minimum in the US is 4% so these are the weakest vinegars you can legally buy. They may be ok for some cooking but for cleaning they will not work as well, will definitely not kill weeds effectively, and are risky to use for canning.

If you want to have grain based white distilled vinegar, Heinz makes theirs only with ethanol from grain. It sells for a bit of a premium but it is your best option in this respect. Fleischmann’s vinegar makes organic white distilled vinegar in the 16 oz. size only. It has spotty distribution though so it can be hard to find. The two largest manufacturers–Fleischmann’s Vinegar and Mizkan Americas–sell mostly private label but a lot of their ethanol is likely from sugar beets right now. However, the ultra-low natural gas prices recently may make ethylene attractive again.